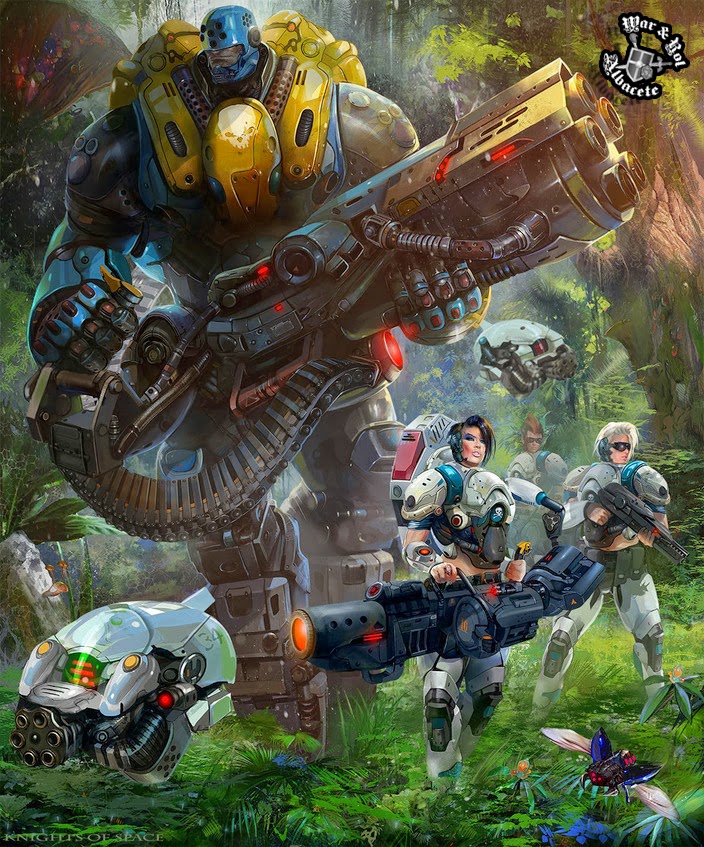 An action-packed skirmish game and range of steampunk miniatures. Join the revolution and battle across an alternate Victorian London! 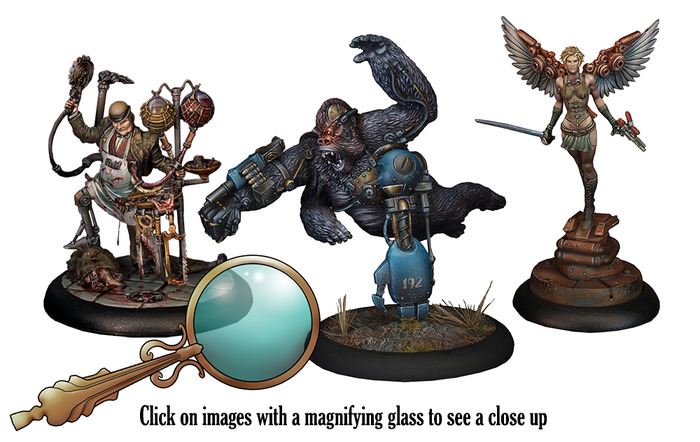 By backing and sharing this Kickstarter you can:
If you want to know more, here's two hours of me gibbering on aboutInfamy: Welcome to The Big Smoke!

Infamy miniatures are bespoke 32mm scale steampunk models, sculpted in amazing detail and cast in high-quality resin by experts with decades of experience.
Click images with a magnifying glass on them for a much larger version. 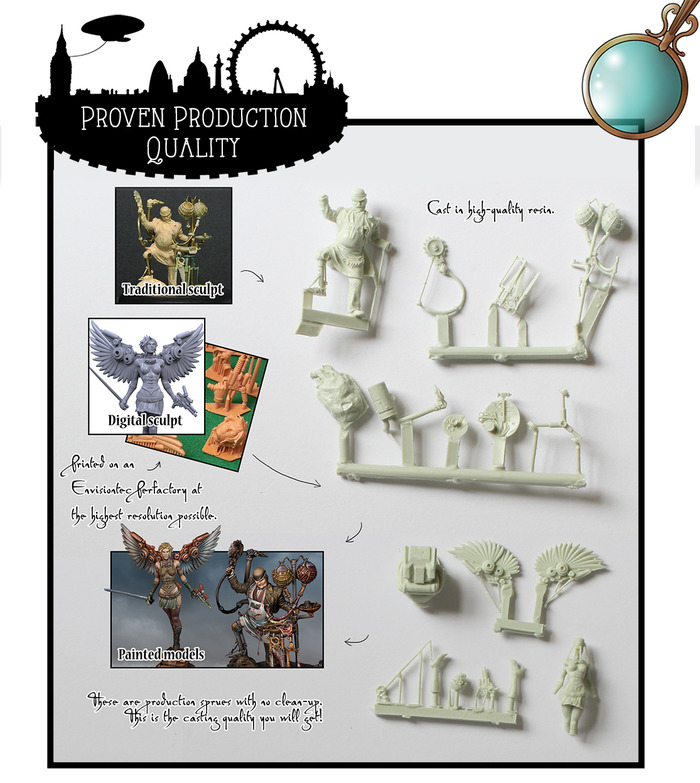 The models in this campaign are split into different categories, determined by both the size and complexity of the kit - Regular, Large and X-Large. The number of minis you can choose from each category is determined by the Pledge that you choose.
You can add as many extra miniatures to your Pledge as you desire. Simply add the cost of them to your overall total.
Miniatures are shown as finished products or traditional sculpts where possible. Digital renders of the models will be printed on an Envisiontec Perfactory (the best machine in the world for fine-detail printing). Other models shown are concept art and where possible, I will list the sculptor who is due to do the sculpt.
The miniatures come with round lipped bases.

Choosing models
When building a gang it is wise to have a balance of Specialisms - Intelligence, Skill, Strength and Technology. For this reason I have added the symbols next to each miniature. Some Kingpins have special rules that mean they adjust the balance of gangs (eg. Tesla can take more Technology based models without penalty to efficiency). I will make these clearer toward the end of the campaign. If you need to alter or add to your choices at any point, even after the campaign has finished, it will be really easy to do so! 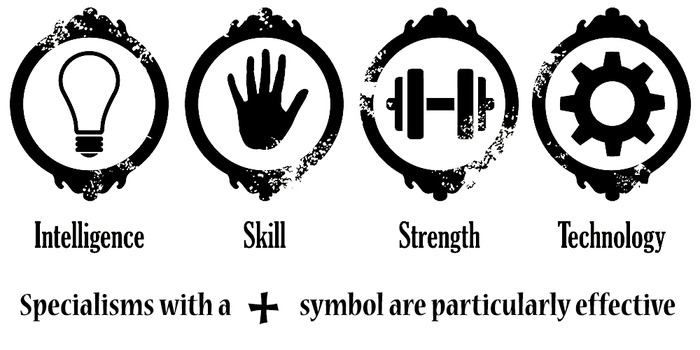 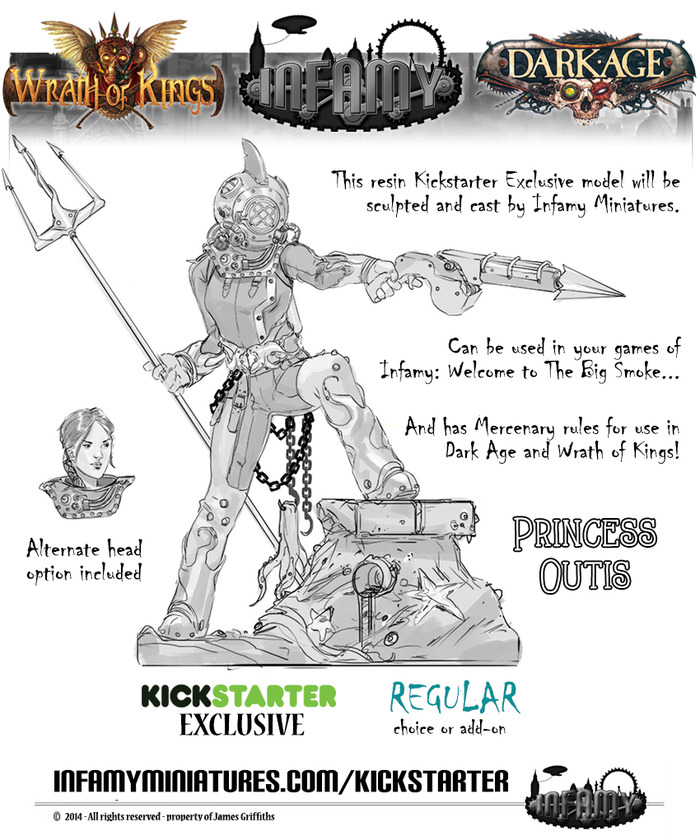 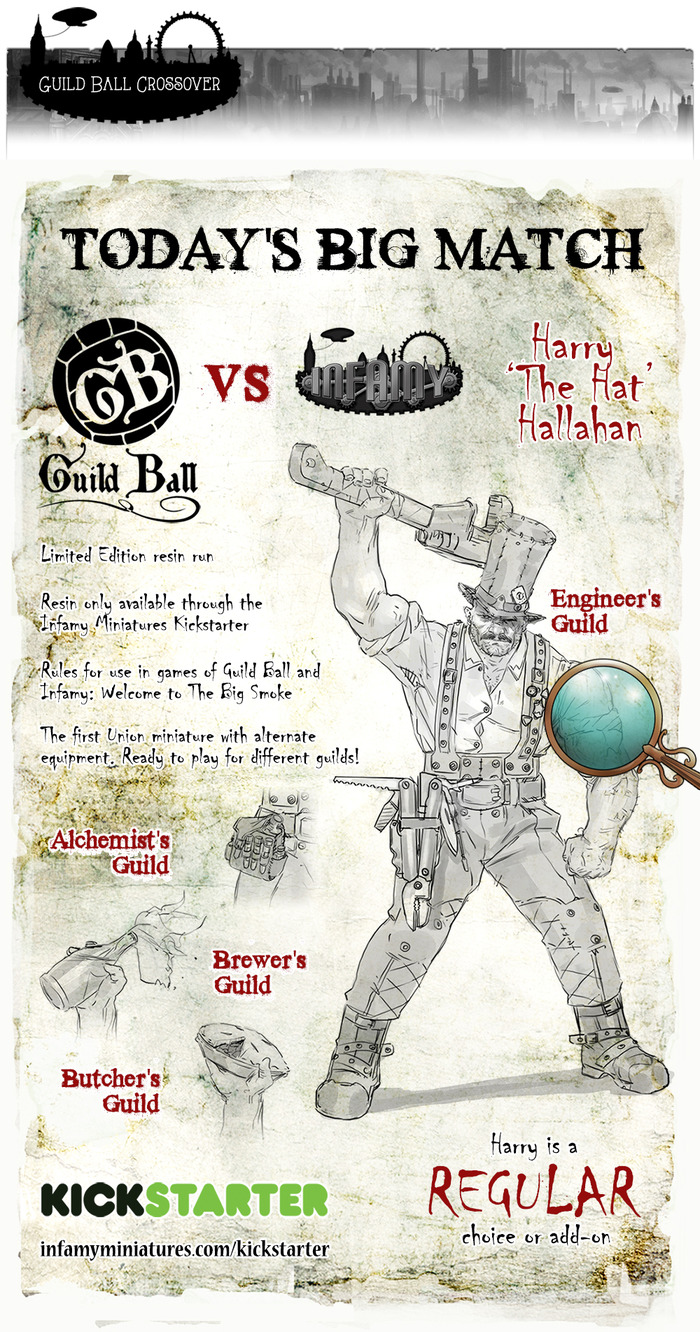 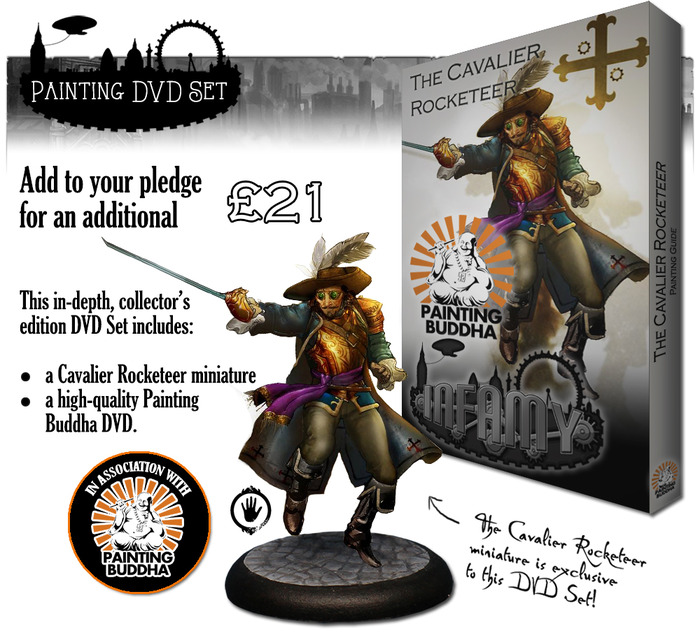 Multi-award winning painter Ben Komets will guide you through his painting process on the Cavalier Rocketeer, covering basing, painting, detailing, and more.
This model will only ever be available with the DVD so don't miss out on an awesome mini and an amazing way to improve your painting!
(It's also a bit of a bargain, if I do say so myself! Please note that the cover image is not final.)

Pledges to this Kickstarter vary greatly, from as little as £1 for 'Digital', all the way up to the 'Lifer!' pledge.
The standard pledges are shown below and will be updated with any extras if stretch goals are hit. Should things go well, 'Battle' and 'Massacre' will be the sweet-spots for extras. 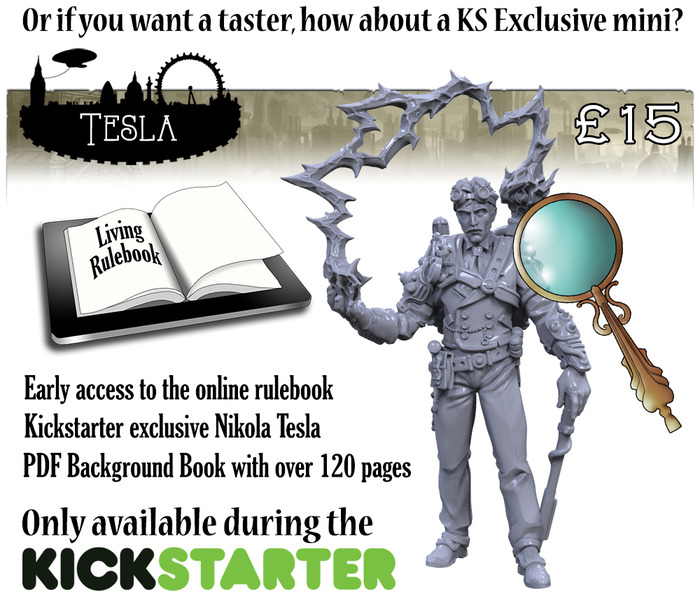 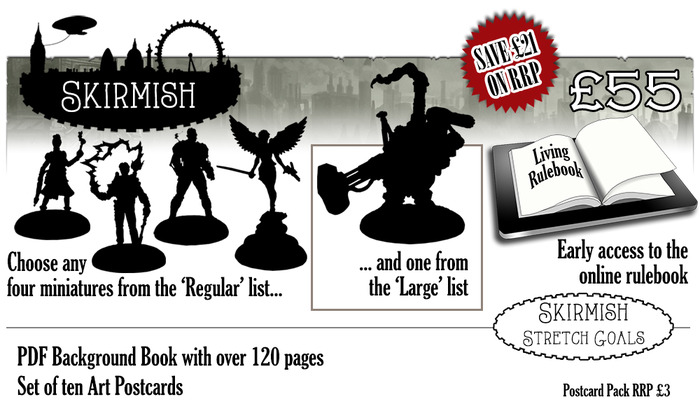 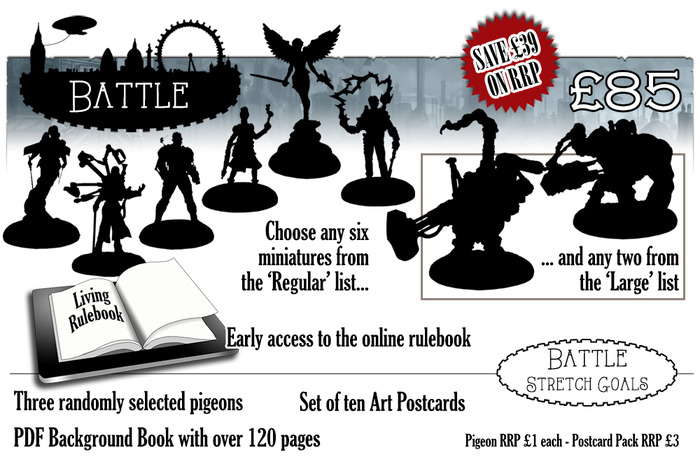 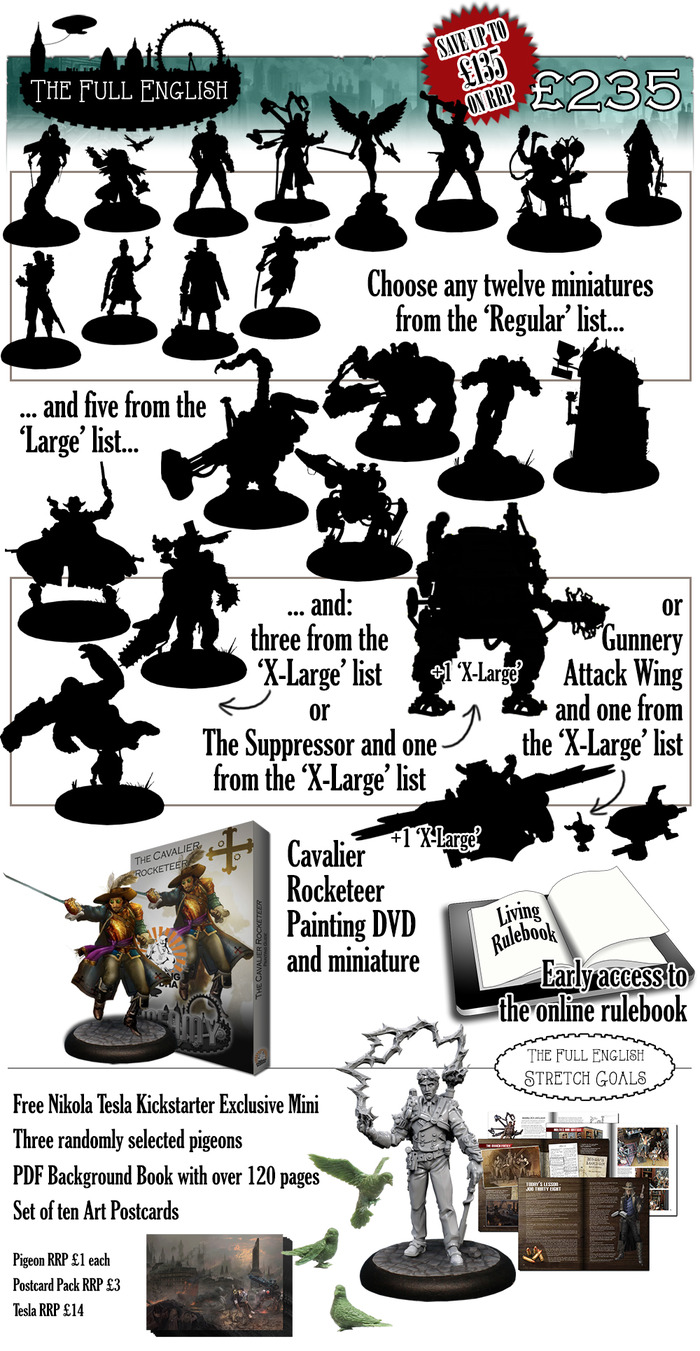 With the £10,000 goal target thoroughly smashed, the campaign has been unlocking stretch goals. You can see the completed stretch goals in the list below and check out more details in the campaign's updates or the various pledge images above. 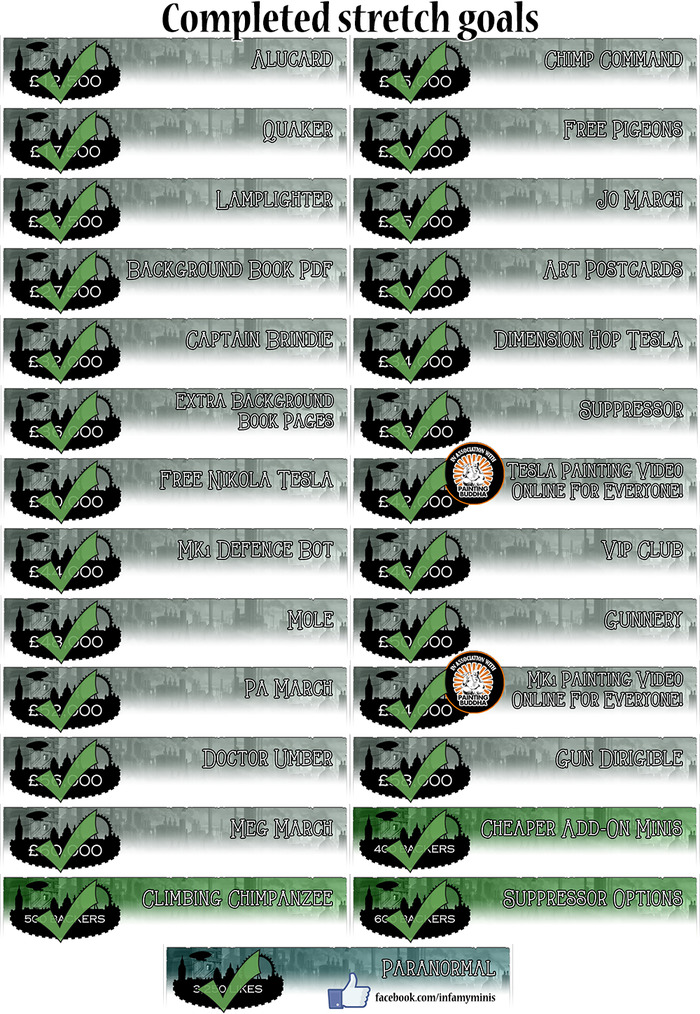 Infamy: Welcome to The Big Smokeis a 32mm, character-driven skirmish game that focuses on action-packed turns.
Living rulebook -Rather than commit to a printed rulebook straight away,Infamy: Welcome to The Big Smokewill be an evolving online resource that backers can access.
You'll get early-access to the latest rules and errata and be able to play the game to your heart's content while it is refined. Should you wish, you'll be able to provide feedback on the rules and stats to improve the game.
Non-backers will be invited later in the process, during an open beta, before the game is finally locked down and made into a printed tome. 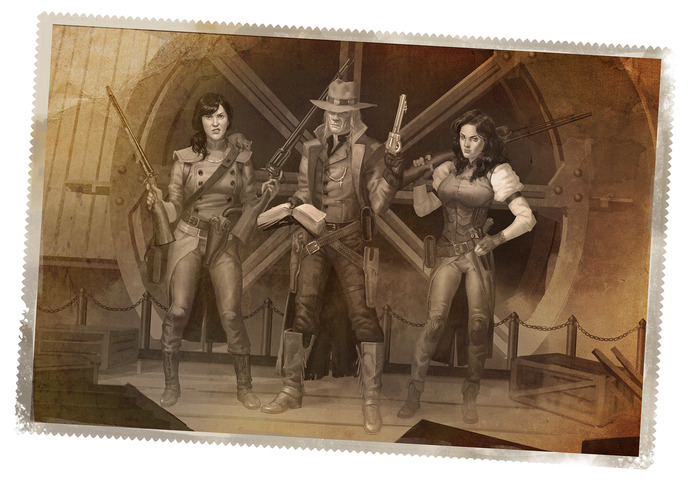 The basics -Some of the game's cool features include: 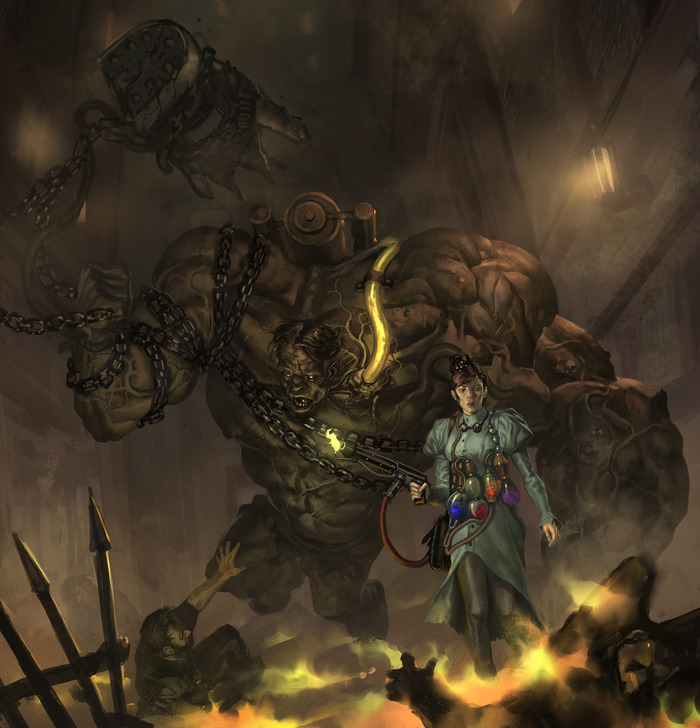 Kingpins - Each gang in Infamy is headed up by a Kingpin - these are the most powerful combatants and skilled leaders in the game. From the cunning and synchronised strategies of Sherlock Holmes, to the brute force of the mechanically powered Toad, or the senile bimbling of Uncle John, each Kingpin is unique and brings a range of options and new challenges.
Packed with character - Infamy is all about making interesting stories in battle, so there are no faceless grunts. All the models in the game so far have a personality and a defined style. Finding the right mix is vital to success at a higher level of play, but, if you just want to have fun, the very clear traits of each character mean you'll have a great time.
Specialisms -Every model in Infamy can be assessed by their specialisms. These are:

Each specialism is represented by a playing card suit. A model will require both a high card total and a card of the relevant suit to perform their very best skills. This rewards players who perfectly balance their gang to make the best use of all four specialisms.

It is the late 19th century and technological revolution is sweeping through Great Britain. Sparked by Mycroft Holmes' creation of the Cogitation Engine, the nation's capital is caught up in a wave of invention and discovery. 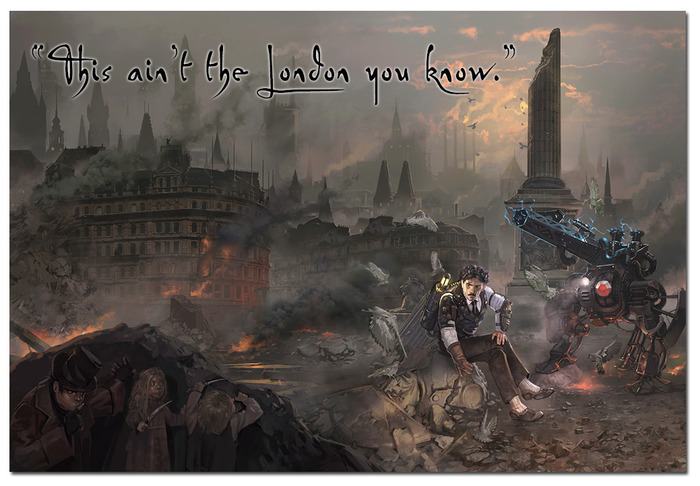 The city thrums to the sound of gigantic and increasingly-elaborate machines, their maze-like interiors of cogs and pistons churning around the clock. Powered by armies of navvies who shovel fuel into the huge burners and risk their lives performing maintenance, these machines drive the city. They are the lifeblood of London's 'Golden Age' and fill the air with the thick smoke of industry and mass-production.
The development of increasingly powerful Cogitation Engines has laid waste to the traditional structure of power in London. Long-established institutions, initially reluctant to take on the 'dangerous' new technology, are on the brink of collapse and now they must battle to retain control. 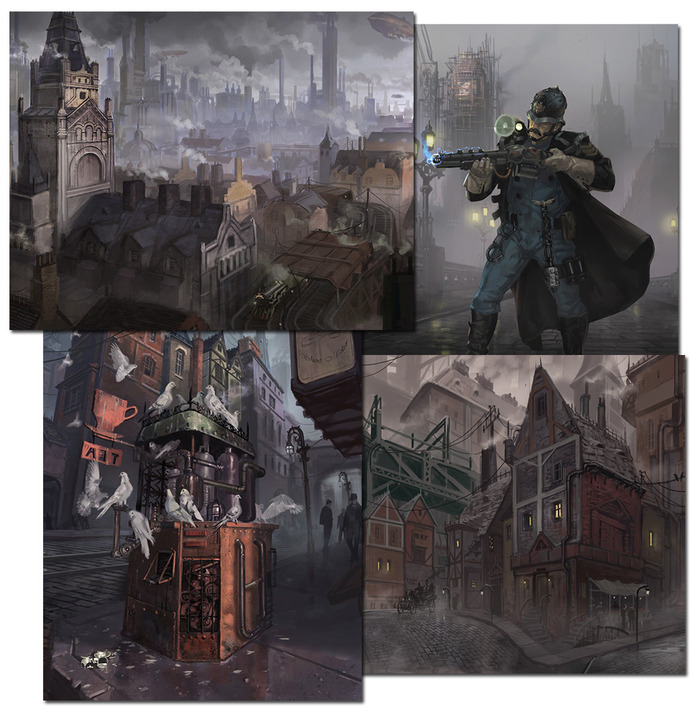 While they flounder in the wake of change, upstarts rise to power, embracing the new age, creating ever more incredible tools, machinery, intelligence-gathering methods, and weapons.
These companies, corporations, institutions, and their members reside in ornate and elaborate towers, rising high above the streets, increasingly isolated from the machinery-filled nightmare evolving beneath them.
And in the city's underbelly the downtrodden, forgotten and abused working-class grow angry. Opportunistic rabble rousers, crime lords, Kingpins, and undesirables gather support in the annexed areas of the city, all hungry for a piece of the pie.

The awesome folks at Golem Painting Studio are ready to work their expert brushmanship over yourInfamy: Welcome to The Big Smoke pledge should you so desire! If you have questions about any of these painted pledges, please send me a message. 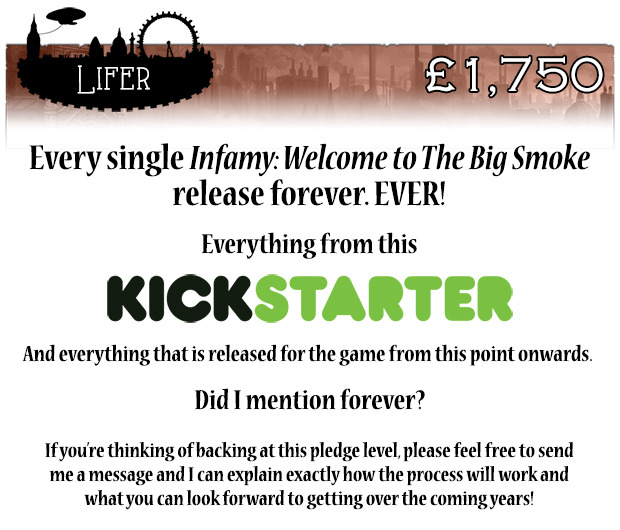 Pledges will be packed and shipped by Element Games - an awesome independent geeky haven, with an online store and brick and mortar shop in Stockport inside the North West Gaming Centre.
Publicado por Unknown en 13:21 No hay comentarios: 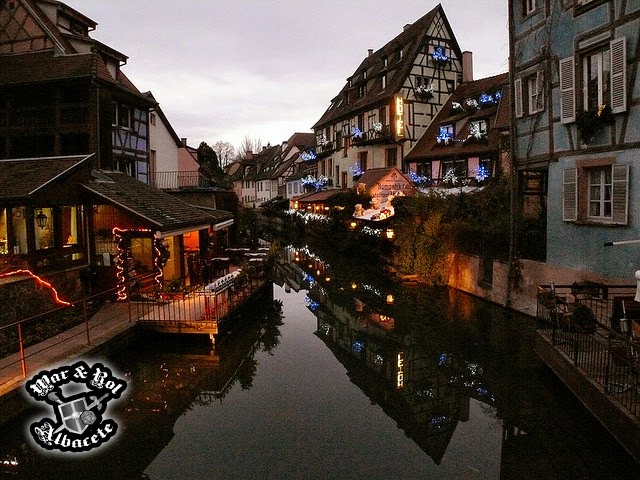 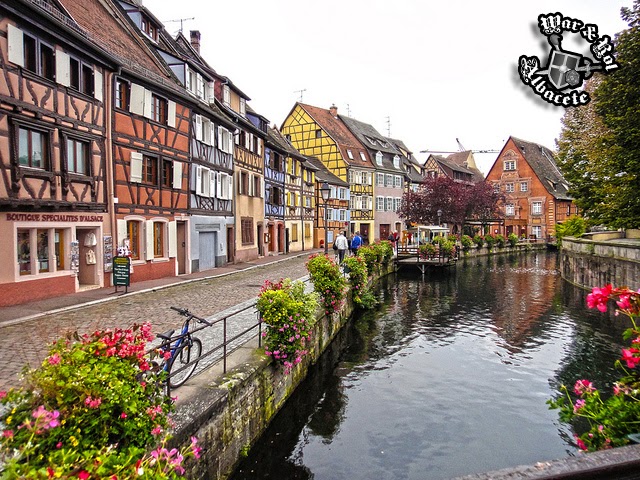 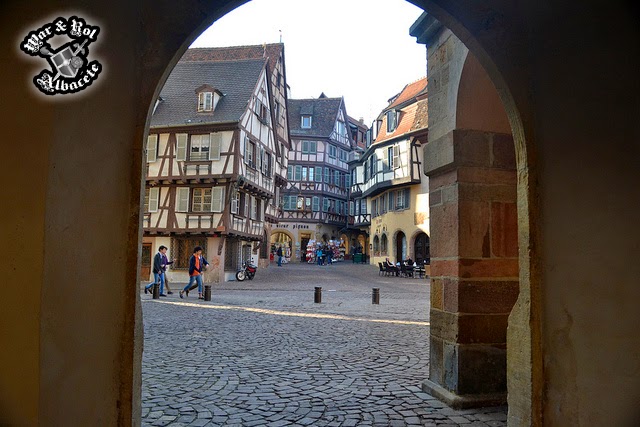 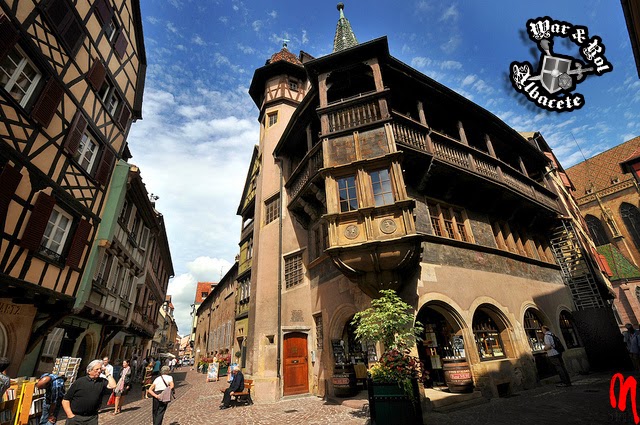 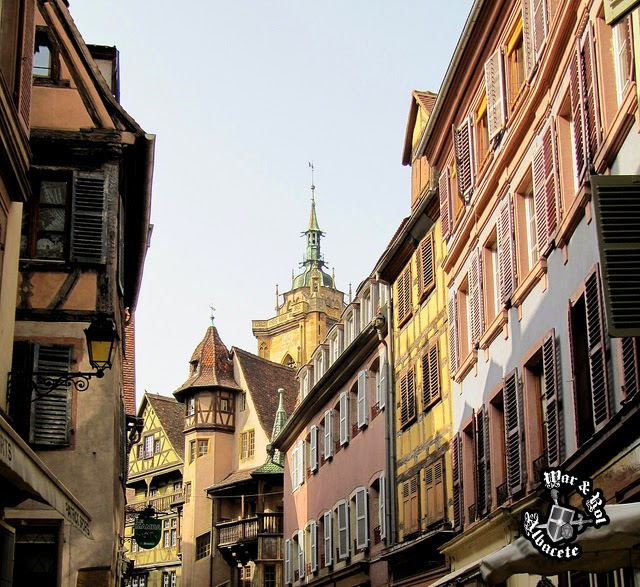 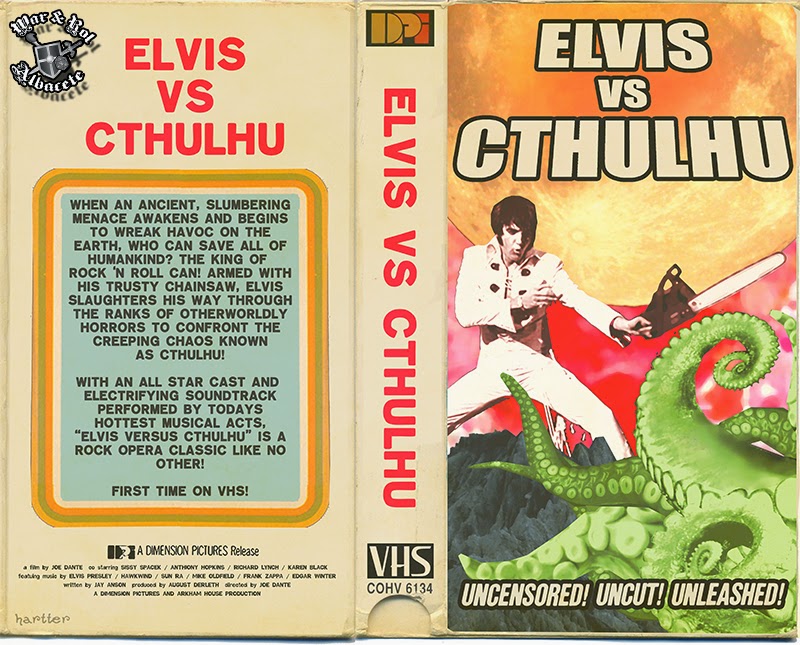 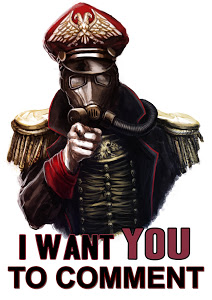 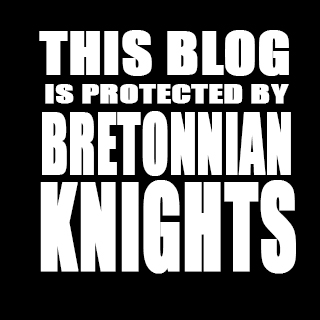 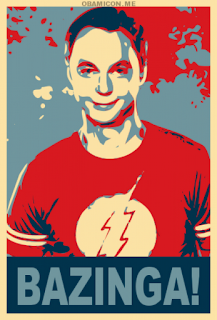 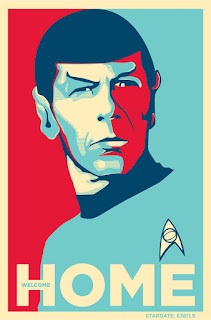 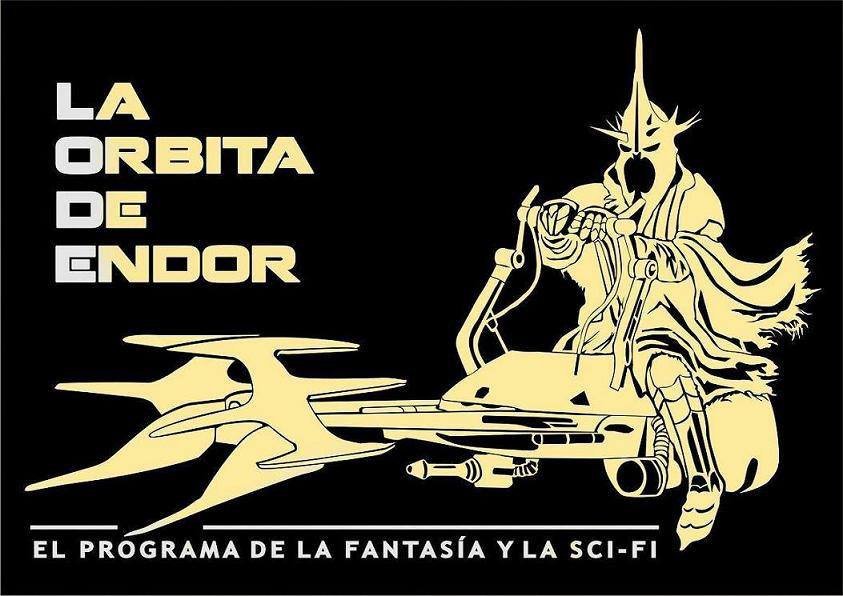 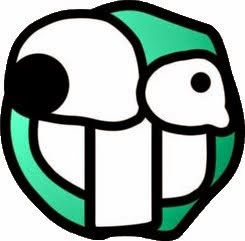